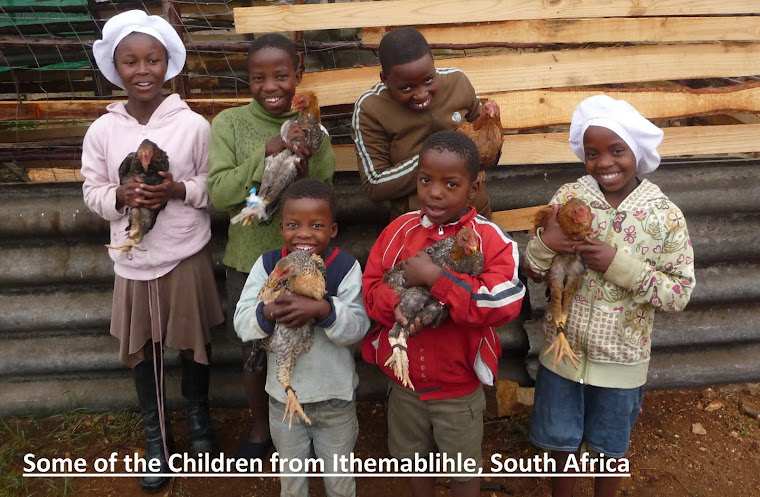 When I left this morning, I drove down the track and saw a beautiful kingfisher; it stayed in front of me for a few minutes but flew away just before I could reach for my camera. I then continued and came across a troop of monkeys. I love South Africa; there is no other place like it on earth!
This morning I made my way up to Amangwe Zulu Crafts near Escourt about one and half hours away from Pietermaritzburg. I met with Barbara and I bought some brilliant craft to re-sell in the UK.  After I had had an in depth conversation with Barbara, about the fantastic work she is doing, I headed back to Pietermaritzburg.
I pulled into the shopping centre to print some pictures for the children and Ithemablihle and then continued on to Sithembakuye. I met with Russell and we had a good chat about the future.  I gave them some hats which have been knitted by a wonderful lady in the UK.
﻿﻿

Then I went to Ithemablihle to check how the house was coming along. From the pictures you can see things are still progressing. I said my farewells to all the children and Thandiwe. I hate this part of the trip. I hate good byes!!
﻿﻿
﻿﻿

Wednesday. I dont wont to leave!

Today I spent the morning again at Dlalanthi. I was taken by Gugu and Faith into a very rural area outside of Pietermaritzburg. There I met with an inspirational group of people, a mix of young and old, male and female. They are running a community-led Childcare Forum. They are doing some great work and deserve credit for their achievements thus far. However when It came time to leave we had to make a dash due to an almighty thunder and lightening storm. I went to run from undercover to the car, I slipped and in true comic style feel flat face first in the mud! I was covered and had drive 45 minutes back to Pietermaritzburg and had to go home and have a shower before my next meeting.
I then went to meet with Dawn at 1000 Hills Community Helpers. We had a very posoitive and productive meeting. She is truly an amazing woman and her staff members are also a credit to her organisation.
Then i visited Theresa to collect some paper work and handed out some donations. After that I went to Ithemablihle to check on progress and the pictures tell that story.

Today I spent the majority of the day with Dlalanathi (www.dlalanathi.org.za) an organisation based in Pietermaritzburg. They are working with communities on child-development focusing, on the family and how parents interact with their children. We were shown around one community by two of Dlalanthi’s finest community managers. They are doing some very interesting work and tomorrow I will visit another project of theirs in another community on the outside of Pietermaritzburg.
Unfortunately Debbie and I witnessed why roads in SA are so unsafe. A combi taxi which was travelling too fast hit a pick up and careered into a group of school children. We rang the emergency services and our thoughts are certainly with those families which were effected.
We then travelled to Ithembalihle to check on progress there. The weather has been awful here for the last few days. Although today has improved. We arrived and distributed school shoes, which had been bought by the building group, for the children, who attend school. They had painted the window frames and hopefully the glazier will come tomorrow. The solar boilers and doors will hopefully be fitted this week.
Posted by Claire @ GAGA UK at 10/18/2011 09:26:00 PM No comments:

Well after a day at the coast and catching up with an old friend. I travelled up to Greytown yesterday (Sunday) which is about 70 kilometres from Pietermaritzburg. I stayed with Jenny and Keith who laid on a great dinner for me and a bed for me to sleep in. Jenny and Keith are friends of the Morrison Family up in Dingwall.  Sometimes the more I speak to people, the more I realise we live in a small world. Jenny organised for me to visit two projects today (Monday) ‘LETCEE’ and a ‘Out Reach Charity connected to Shalom Church’.
LETCEE was an ECD (early child development) project. I have one word which sums up this project – AMAZING. I'm terrible with names but the founder/director, Mary and her staff are doing amazing work against tough circumstances. They train pre-school teachers and this year alone 350 women will leave LETCEE with an accredited diploma in pre-school education. They also run out-reach programmes; which centre on ECD in rural areas where children can not access pre-schools as easily as others nearer larger villages or towns. Whatever I write will not give LETCEE the credit it deserves. The women at the training facility all make their own equipment which will be used by them when they graduate and start working in pre-schools. All the equipment is made from recycled rubbish which items include a desk and chair which is strong enough for an adult to sit on.
I then moved on to visit the project connected to Shalom Church. Lauren a young woman, a qualified nurse, is embarking on developing a new system of distribution of ARV’s, ARV compliance and also testing for HIV. It’s an interesting concept & if she is able to make it work, she will be able to save hundreds of lives. I wish her all the luck and I hope to be kept informed of her progress.
Since arriving two weeks ago there seems to me there is a new emphasis on community participation in projects. In other words the community is consulted on projects which organisations they wants to implement in their communities. Interestingly at first this project struggled but with the community participating the success rate is outstanding and far more productive. There has been, and unfortunately continues to be, a mentality of "we know best". As such projects are started without proper understanding and often hinder rather than help. There is one thing for sure there is still no one model which can be applied to the up-lift-ment of the community. However charities are getting closer and there is one thing for sure, without the community behind you, which you are trying to help, that success is very limited and has a short life span.
Posted by Claire @ GAGA UK at 10/18/2011 06:53:00 AM No comments:

Hamba Khale - We will miss you!

Alan: Well today is our last full day in South Africa and there is still a lot to do, BUT now at the end of the day all the rooms have been rendered, the shuttering has been taken off the shower trays, we have installed a solar light in the outside toilet and we have completed the steps and pathway around the building and we erected the sponsors name board on the building. We had to say our goodbyes, never easy to do, but we sang songs with the kids, took photos and then it was time to leave. 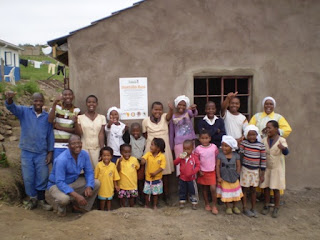 The effort of the volunteers, both before and during the trip, is without a doubt, superb. They worked long hours, and took their own holiday to help build a home, for 18 children. Through their own expense and sweat. Both GAGA and Ithembalihle are indebted to them and wish them all a safe journey home.
THANK YOU!
Posted by Claire @ GAGA UK at 10/14/2011 07:49:00 PM No comments:

Hetic rush - but we are finished!

Wednesday.
Helen: The team met all their objectives yesterday, the showers were completed, and the second chicken coop was finished. The third step leading up to the front of the build was laid. Two of the team went to a local garden centre; each member of the team had offered to buy a tree. Seven trees were purchased, three avocado, two orange, one lemon and one grapefruit tree. They were all planted and well watered!
﻿

Charlie: I had a great meeting with Thokozani Meya from Frey’s. Frey’s is the business which owns the pre-school building which ‘First Step Right’ operates from. Alan and Gael joined me for the meeting; we all showed Thokozani around. I hope, and I’m pretty sure, he was impressed with the whole operation.  Liz had also joined us and whilst Gael was busy, she took over the running of her class. Thokozani confirmed the interest of Frey’s to support the pre-school, which is a great assurance for all of us. We look forward to a positive relationship. Watch this space!
Thursday.
Alan: Well today is our last full day in South Africa and there is still a lot to do, BUT now at the end of the day all the rooms have been rendered, the shuttering has been taken off the shower trays, we have installed a solar light in the outside toilet and we have completed the steps and pathway around the building and we erected the sponsors name board on the building. We had to say our goodbyes, never easy to do, but we sang songs with the kids, took photos and then it was time to leave.
﻿
﻿
Posted by Claire @ GAGA UK at 10/14/2011 06:48:00 AM No comments:

A break from the grind and more visits to potential projects

Some of the team members took time off today to visit PheZulu Village. At the village they have a large colony of crocodiles, the eldest being 106 years old, originally from Botswana. The reptile house was the next place of interest. The guide explained which were harmful and how they affected you if you were unlucky enough to be bitten. Two of the girls took all their courage in their hands as well as a huge python!
A mock Zulu village saw us being entertained by traditional singing and dancing and visiting traditionally built houses. A mini safari took us over the hill tops where we were lucky enough to see giraffe, wilder beast and zebra’s almost at hands reach.
It was not all play however; another step had to be laid at the build and a check up on how the rendering was going.
Alan and I visited projects yesterday we started with COCA which is a church based operation with an outreach programme into the local community. We met with Bobby and Minky who discussed the programme who then took us to the community centre where about 150 local women where attending 6 to 7 workshops including cooking, beading, a new baby club and many others. The whole operation was very impressive and the ladies where clearly enjoying all the different activities.
Then we moved on toward Durban and met with ‘The Robin Hood Foundation’. Again Alan was clearly impressed with the presentation of the organisation as was I. Again they are doing some brilliant projects and we hope in the future we may be able to look at how we could work with them. Kim who is their co-ordinator showed considerable passion and it was obvious the level of attention which is taken in each programme they undertake.
Finally we met with Dawn Leppan, from 1000 Hills Community Helpers. Alan sat and had a brief conversation with her. She was recently awarded for her outstanding efforts to the community and she was telling us about the ceremony. Alan and I both believe there are few if any more deserving! We went with Dawn to visit Theresa at another project in Inchanga which GAGA may look to potentially support. Dawn is going to investigate some of the issues Theresa has, and hopefully we will be able to get them resolved for her.